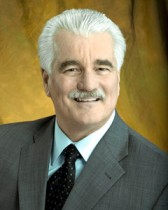 Dennis LaRochelle, a partner in the Oxnard law firm of Arnold LaRochelle Mathews VanConas & Zirbel LLP (A to Z Law), is the new president of CAL-ABOTA, the state chapter of a national association of plaintiff and defense jury trial lawyers. ABOTA’s goals are to preserve the right to a jury trial in civil cases (guaranteed by the 7th Amendment) and to enhance civility, integrity and dignity among litigators. Members include judges and an equal number of attorneys for plaintiffs and defendants.

LaRochelle was installed as CAL-ABOTA president on Nov. 5 at the group’s annual conference, held Nov. 3-8 at the Mauna Kea Resort in Hawaii with 285 people in attendance. At the conference, members celebrated CAL-ABOTA Trial Lawyer of the Year Michael A. Kelly of the San Francisco Chapter, held education programs and installed new officers.

Membership in the prestigious American Board of Trial Advocates (ABOTA) is limited to attorneys who meet the organization’s stringent jury trial criteria and are elected to join by their peers. To qualify, an attorney must have handled at least 10 civil jury trials in which a verdict was reached and be approved by 75 percent of their chapter’s membership. ABOTA has over 7,000 members nationwide in 97 chapters. In California, CAL-ABOTA represents eight chapters with 1,700 members.

LaRochelle is the first statewide president from Ventura County since the local California Coast Chapter, which covers Ventura, Santa Barbara and San Luis Obispo counties, was formed in 1988. LaRochelle previously served as president of the California Coast chapter. His new term is for one year.

LaRochelle has a number of goals in his role as president. “I’d like to see more done to make members of the public want to participate in jury service,” LaRochelle said. “CAL-ABOTA will continue its efforts to educate the public on the merits of our jury system.  Within my profession, I want CAL-ABOTA to do what it can to stop the decline in civility. No matter how heated the battle, all trial lawyers should treat their opponents with courtesy and respect.”

CAL-ABOTA is the organization that led the movement to change the California Lawyer’s Oath this year, for the first time in 140 years, to include a civility pledge. The Supreme Court, acting on CAL-ABOTA’s petition, changed the oath on April 23, 2014, to include: “As an officer of the Court, I will strive to conduct myself at all times with dignity, courtesy, and integrity.”